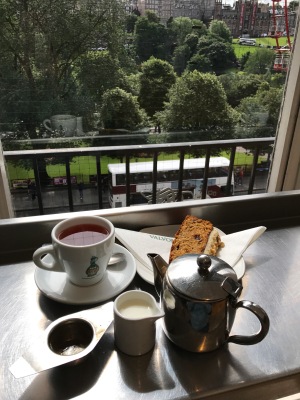 The weekend was on planning and deciding what to do a bit chaotic but the monday and tuesday were already set. On Monday I bought a mealdeal breakfast: a sandwich, a little juice and a little bag of fruit – for just £3. After breakfast I went to the city center, a little walk on foot to Jenners shopping mall. But before I entered Jenners, I had to activate my ‘Royal Edinburgh’ ticket that includes: entrance tickets to the three major venues: Edinburgh Castle, Royal Yacht Brittannia and The Palace of Holyroodhouse, and a 48hr busticket for three different kinds of city sightseeing busses who ride their routes through and around the citycenter. I activated it at the little cute busstation hut at the entrance of Princes Street Gardens. 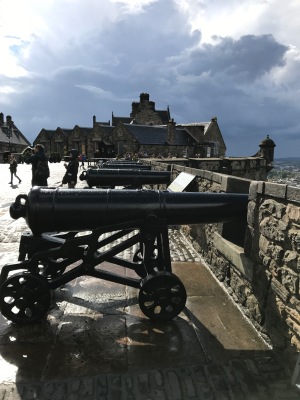 After activating my tickets it was time to plan my days and have an English cup of tea. At Jenner’s shopping mall is located on the 2nd floor a Valvona & Crolla delicatessen café. With a cup of tea and a piece of delicious carrotcake on the table, I grabbed my little notebook and made a global planning for the next couple of days. What is possible to visit? Until which time are the venues visitable and how can I combine everything I – probably – want to visit in the upcoming hours and days.

This Monday I started my cultural and historic tour with a visit to the Edinburgh Castle. I entered the castle through the stadium (Emplanada) and from up there, on the walls of the castle alongside the canons, you have a stunning view above Edinburgh! The castleground is placed on a volcano top. The venue does not only contain of a castle, but from the Esplanade you walk through the first Gatehouse. From there on you walk through the smaller Portcullis Gate and then you have really entered the castle. What the venue all contains, such as several little museums, barracks, the impressive national war monument and so on…will be written in a special blog post about the Edinburgh Castle. 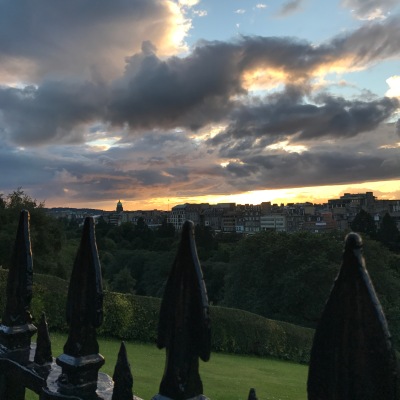 A few hours and lots of information later I left the Edinburgh Castle. It was closing time and I wanted to do some other cultural history things as well. I walked downhill on the famous Royal Mile – which is not a single street but a couple of streets named together as the Royal Mile because you can walk from the Edinburgh Castle all the way straightforward downhill to the Palace of Holyroodhouse. The Royal Mile is really nice for an afternoon or evening walk, accompanied by lots of little shops, now and then a bar, museum, cultural site and so on.

Halfway the Royal Mile is located the St. Giles Cathedral. I decided to visit this cathedral after the Edinburgh Castle because you can visit it until 19:00. So time enough for wandering around, looking at the beautiful glasses, sculptures, graves and so on. The funny thing I discovered: pay £2 for a photography license – a sticker so you are allowed to take photographs and in that way fund the organisation. A really good idea! The story about the St. Giles Cathedral will be written of course to in another special blog post.

The last cultural visit of this day was to the National Library of Scotland. This is located near the St. Giles Cathedral and therefore was close by. Soon after I entered the library I discovered a little café. Time to have a simple dinner. It was a ‘Seeded Roll Sandwich‘ accompanied by a cheese scone – yes I could not resist a scone if I stumbled upon one – and the ‘IRNBRU’ local soda drink. After dinner I have been to a very impressive exhibition at the National Library of Scotland. It was a photography exhibition by Hurley about ‘Life of the Expedition on the Drifting Sea‘. A real life story that took place in 1915 about a jammed ship in ice and it’s crew, the situation and lives captured in photographs.

My visit to the National Library of Scotland was at an end and I decided to walk the Royal Mile again uphill, back towards the Edinburgh Castle. In front of it at the Emplanada were several groups of soldiers and marines practicing for the Royal Military Tattoo that takes place there every year in August. I would love to see a real show of them once, but no idea yet when. Maybe in another year at another holiday.

For an hour a listened to the music and had seen a little of the practice. Meanwhile I had a chitchat with a Swiss family who knew some of the people that will be participating in the Royal Tattoo. I just stumbled upon it by the music I heard when I was walking on the Royal Mile, they knew every evening there will be a rehearsal until the start of The Fringe Festival in Edinburgh. After an hour when the guards where moving the fences more away from the castle, it was time to go home because you could see less and it was getting late. The sunset had started.

My evening walk was from the Edinburgh Castle entrance at the Royal Mile towards the Mound, the middle of the Princes Street Gardens where the National Scottish Gallery site is located. I had a wonderful view on the sunset and the formed as a layer just above the sun. One of the most rare and most beautiful views I have seen.
Tomorrow part two of my Royal Edinburgh ticket tour.

This site uses Akismet to reduce spam. Learn how your comment data is processed.

Translate my blog in your language

With this donation you help Sophie's Blog to stay online and spend more time in it. Yearly blog costs €175,-